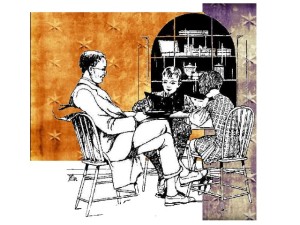 You sacrificed to homeschool your children or put them in a Christian school. Yet they still turned their back on you and God. Today they are nothing more than another statistic, no different from any other sinner without Christ. There are almost unlimited people, Christian workers, articles and general advice to tell you what you did wrong.

According to the Word of God, we must carefully examine and confess every known sin. “Purposes are established by counsel.” Proverbs 28:18 The Word of God commands us to seek out Godly counsel to know if we are doing what is right. We will never be perfect but are we “training up a child in the way he should go”? If, after diligently searching the Scriptures, seeking Godly counsel and praying for the direction of God’s Holy Spirit, we find nothing wrong, then there is one other possibility which is rarely, if ever, mentioned. The child is responsible for his own choices.

“The fathers shall not be put to death for the sins of the sons, neither shall the sons be put to death for the fathers. Every man shall be put to death for his own sin.” Deuteronomy 24:16 Our Secular Humanist culture despises the concepts of sin and personal responsibility. So God gives us an extended example at the end of Judges, chapters 19-21. I have heard and read thousand upon thousands of sermons and only one man has preached on this passage. A very brief overview: A Levite had a wife who left him. He went back to her father’s house, retrieved her and stopped for the night in a town of Benjamin. An old man invited them to stay the night with him. The men of the town surrounded the house. The old man gave the Levite’s wife to these men and they raped her all night. When the Levite awoke in the morning, she was dead. The Levite cut her in twelve pieces and sent the pieces “to all the borders of Israel.” All Israel gathered together and asked for these men to put them to death. The tribe of Benjamin refused to hand them over and the rest of the tribes attacked Benjamin. At first Benjamin killed thousands of his brothers, but Benjamin was eventually destroyed so that only 600 men were left.

The important point is in Judges 28:22 “and Phinehas the son of Eleazer, the son of Aaron stood before (the ark of the covenant of God) in those days.” Phinehas killed a leader of Israel with a Midianite woman during sexual intercourse while Moses was still alive before they crossed the Jordan River.

“And the people served the LORD all the days of Joshua, and all the days of the elders that outlived Joshua, who had seen all the great works of the LORD, that he did for Israel.” Judges 2:7

“And also all that generation were gathered unto their fathers: and there arose another generation after them, which knew not the LORD, nor yet the works which he had done for Israel.” Judges 2:10

Though the historical account is placed at the end of the book of Judges, these Benjamites were “another generation after them, which know not the LORD.” These wicked atrocities occurred just a few decades after the death of Joshua.

Yet nowhere in the Word of God is any fault laid at the feet of Joshua. There is no direct blame placed on Eleazar’s entire generation for the actions of these men. The Benjamites were completely responsible for their own actions.

As parents, we can do everything right, yet have children who openly rebel against the Word of the LORD. The prophet Samuel’s children corrupted the Word of the LORD and took bribes. Noah was righteous in the eyes of the LORD, yet every wicked sinner on earth today is a child of Noah. Though we need to constantly examine our hearts for sin, there is no reason to blame ourselves for every sin our children choose, to the point where we destroy our own ministries with undeserved guilt.

2 Replies to “What Did You Do Wrong?”