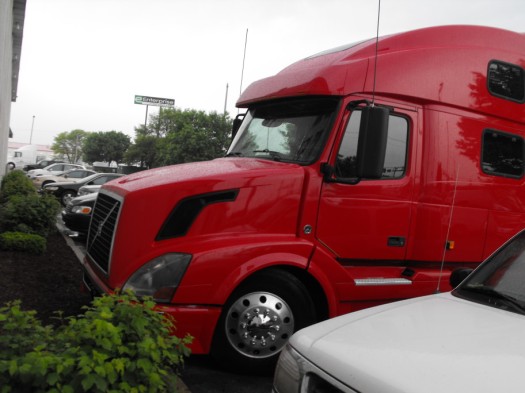 We travel all over the forty-eight states, so we see a lot of life. This does not make us experts, but we want to attempt to show how our culture is on a downhill slide, mostly because of sin and secular humanism. There are people who don’t speak English and don’t intend to learn, people who want space for their religion but don’t want us to have any for ours, people who are infected with the deadly diseases of damnation-directed thinking, don’t know it, and won’t be convinced of it. They think they’re ok, and we’d be ok too if we could just shut up about that Bible stuff. Sorry, no can do. It’s the only thing that matters.

I say “we” when I talk about my husband and I and what our future holds because I consider our lives to be united and our goals and plans to be intertwined. Charles Dickens, in David Copperfield, has a young female character who married a much older man. When asked about the state of their marriage by a person who tried to make her worry about potential gossip and speculation, she said simply, “We have a unity of mind and purpose.” Women who talk about being truckers’ wives usually point out the separation, the loneliness and the need for them to be apart yet to trust and wait. These women are simply enduring, and it sounds like their lives together are on hold, stagnant. I think that’s a bit selfish, with all due respect for the truth of these points. The two of you are one. Isn’t he lonely, too? Doesn’t he need to trust you? Men have been leaving their wives alone for necessary careers for centuries: Military, diplomatic, evangelistic missions and pioneering are just a few. And for centuries women have been guilty of betraying trust and deciding they couldn’t handle the loneliness as well as men.

The first thing you must do is stop being selfish. Don’t think you aren’t. Don’t believe you’re sacrificing so much just by agreeing to be a trucker’s wife in the first place. Think again. You agreed to get married, and that took you out of the category where you get to say, “I” very often. You have a husband. You may have children. Responsibilities keep expanding, such as a house, a car, and other things you own or have and have to pay for. If you own the truck he drives there can be a whole new set of responsibilities. These things are the responsibility of both members of the marriage, yet women pour out their resentment, saying, “He went away and left me to handle all this.” The problem is magnified exponentially in a bad economy where you may not be making enough money to handle anything except collection calls.

Here comes my “I” paragraph. I said a wife doesn’t get to say “I” much but here are the things that are just “me” things, the stuff I do that I have to do myself or to keep the crazies away and that he doesn’t really take part in. While I was living at home and he was on the road, I found many things to occupy my time. I always worked, at least part time, usually full time with overtime, as a book editor, childcare and eldercare giver, teacher, factory worker, office assistant, receptionist, clerk, and other occupations. I write, obviously, producing puppet scripts, short stories and novels. I have written scripts for Cable TV commercials, a local museum video tour and an in-store infomercial as well as church programs. I draw, and create craft items, and serve in churches, making puppets, putting on plays, designing bulletin boards and decoration for programs as well as writing and test-teaching original church teaching materials and creating the crafts to accompany them. I also polish and convert my husband’s writing to book format or video scripts. Our dream is still alive, of course, to make the video work a reality in the future.

Let me return to the reality of the near-present. My husband was on the road. I had a 3rd shift temp job which I took after two years of “stable” but health-wrecking 12 hr shift factory work. My changing jobs helped our older children out with transportation since we would all be working at the same place. Our youngest had just gone into the military. It became clear that I was not going to be hired on permanently at the place I worked. Our elder two children, while still living at home, had jobs and our daughter’s car as backup to get to work.

My husband and I decided to go on the road together, especially since attending our son’s graduation from boot camp required a trip to Fort Leonardwood, MO and it was the only way I was going to get there. I elected not to get my CDL but to support him by helping with all the paperwork I was legally allowed to do and assisting in trip planning, handling phone use and load finding. I have talked to many husband and wife team drivers and the women always agreed with my decision not to drive. We have met many teams who cannot get enough work to support both of them. Besides, I freely admit to being a basket case when it comes to backing up and that’s pretty much the bulk of a trucker’s job, with a giant rectangle tagging along behind.

This also gave us the opportunity to work on writing and researching the books and videos we want to produce, to be together to brainstorm and polish ideas, and to restore the unity of mind and purpose that flags when you’re apart. We read Scriptures, comment on what we’ve read, deal with the bill collectors together, and it is in all ways better. The economy is still bad, and may be getting worse. Our house is in danger of forclosure, our daughter wrecked her car trying to travel on icy roads and ended up with our car, and both our older children were laid off and had to move to find other jobs and housing. It looks like soon the truck will be our only home. That simplifies life, in some ways. No utility bills, except the cell phones and computer to look for loads and do research for our projects. We are newly returned to being owner operators, which makes for a much less simple life, but we hope it will soon begin to pay off. Our last truck blew the engine with one payment left but once again company driver was not for us.

Life in the truck is not easy. The bed is small and so are the cabinets. Eating on the road is expensive but so is an electrical system that supports a microwave and a refrigerator, as well as making the space to install them. Chances to get to a regular store, even a Walmart, are scarce. We shower and do laundry at truckstops.

Several women have bitten their tongues as they asked me how I like living in the truck because they want so badly to tell me what my opinion should be.

My opinion is that I am better with him than without him, whatever the hardships might be. And he keeps saying he is better with me than without me. I get cranky and resent all the stuff that I have to do and he puts up with that. He gets so focused on the job and the mileage and the performance of the truck and I have to put up with that. He talks to everybody he meets, mechanics, other truckers, any people who can add to that staggering store of knowledge he’s got in that head of his. I hate to talk to people but I realize how much this habit of his has helped us. We see a lot of countryside, even if we do spend a lot of time walking through oil and smelling diesel and listening to idling trucks and whining reefers. We’ve been to places in Canada and back and forth across this country. We’ve listened to volunteers in truckstop churches doing their best to minister to some hard cases. We’ve been in churches where people praised God for truckers.

So, to truckers’ wives who need to vent, I say it works both ways. Except your husband’s too busy driving, so instead of venting, take every chance you get to run him up, not run him down. Love him, instead of resenting him. Dwell on what makes him great, not what makes you miserable. Sure, I’m with mine and you’re not with yours, and it may not be possible for you to go, because your children are still young. I was there, too, but I still had to stop people and my own mind from making me resent the way things were and are. Help him and help yourself by refusing to rise to the temptation of complaining or of sounding like a martyr. Focus on what you are together, what good married couples have always been, stronger together than apart. Unified in mind and purpose. Together, always, whatever, forever.