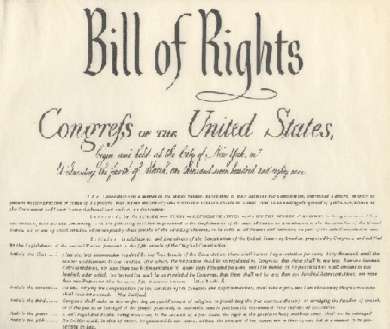 The Constitution of the United States is the political standard for America. It is written in English. It is not a living document. The words mean what they say. The basis for interpreting the Constitution are the Articles of Confederation, the original state Constitutions, the comments of the original colonies as they debated ratification of the Constitution, the Virginia Declaration of Rights (1776), the Federalist Papers, the various antifederalist papers and the European documents these came from such as the treaties of Augsburg and Westphalia and the Magna Carta. While there are other documents and books, they should all come from the time period the Constitution was written or before. Amendments will have documentation from the time period the amendment was written.

The purpose of the courts is to apply the law to the facts of the case. America does not have a system of common law where courts make up law where none exists. Court costs should be low enough to allow justice to be available to all. Courts should not reference other courts as if that is law. Precedent is not law. Since justice is applying the law to the facts of the situation, no ruling should establish legal precedent for another court case. Constitutionality has no relation to precedence.

The Constitution is to limit government, not for the government to limit the rights of the people. The only powers the federal government has are listed (enumerated) in Article One Section 8. Many government agencies, such as the Departments of Energy and Education and the Environmental Protection Agency, are clearly forbidden by the Constitution. Other agencies, while not clearly forbidden, are extremely unwise and should be scaled way back, such as the Department of Transportation and Centers for Disease Control. While these are clearly constitutional agencies, they obviously do a great deal more harm than good.

The primary tool for helping our economy is shrinking the size of the federal government. Reduce government spending by massive government layoffs, shutting down at least half the government departments.

Congress should have no fringe benefits. None zero, zip, nothing. Housing should be an apartment near the capital. No housing allowance. Congress should not be paid until a budget is passed. Without a budget, no government checks should be issued, including and especially the congressional paychecks

Voting is a right and a privilege for citizens. Voters should have to show some form of ID to vote. All government meetings should be conducted in English. Any government employee who issues any type of government ID to anyone who has no legal standing to be in the US is committing a felony.

The second amendment states that, “A well-regulated militia, being necessary to the security of a free state, the right of the people to keep and bear arms, shall not be infringed.” The militia was every male from 18 years old to 55. The age limits varied over time. The difference between a regular military man and a militiaman was that the regular military were paid from the federal government and swore allegiance to the President. The militia swore allegiance to the governor of the state and was paid by the state or went unpaid. Militiamen were to own their own weapons. Service in the militia was a type of taxation. Service in the militia normally did not cross state borders, though it could if both governors agreed.

Though this is not a comprehensive list, it provides a “ready reference” guide as to what to look for in any candidate.

3 Replies to “Not Who to Vote for, but WHAT to Vote For”