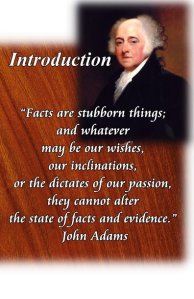 In January 1975, I was a passenger in a multi-vehicle accident on an ice covered bridge in heavy fog near Knoxville, TN. The uninjured grabbed everything we could to flag oncoming traffic to stop. Tragically, we could not get everyone’s attention. Ignoring the fact that the bridge was covered in ice cost several people their lives that day.

Does ignoring the facts usually have such a tragic ending? No. Maybe that’s one reason we have a culture that puts a premium on mockery. Is truth really just a matter of opinion? How is it that the most attention-getting person in a group is the most skilled mocker?

When Jesus said believe in God, believe also in me. (John 14:1 KJV, NASB), Jesus was not asking his disciples, “So what are your opinions about God?” He used the word believe the same way Moses used it when God spoke to Moses out of the burning bush. Moses told God that they will not believe me. (Exodus 4:1 KJV). Moses told God that the elders of Israel would not accept the words of God as authoritative. Why? Because they would not accept Moses as a credible witness. Exodus 4:1 actually means they will not accept me.

Did you think the word believe, as used in the Bible, meant accept something without thinking, blindly? It means to examine the facts and come to a conclusion. The best example that I have come up with in our culture is a jury foreman, when the judge asks if the jury has reached a verdict. When the foreman responds “We find the defendant is guilty (or not guilty)” he means that they believe, because they have come to a conclusion based on the evidence. Yes, it is an opinion, but it is a reasoned, informed opinion based on the facts.

Have you noticed that our modern culture no longer believes in absolute authority? Believe now means “l like.” Haven’t you heard statements like “I believe I’ll take chocolate” or “I believe pinstripes are better than plaids”? Tobelieve in God no longer means a reasoned conclusion based on facts. While insisting on logic, proof, and evidence, in practice our Secular Humanist culture demonstrates that facts no longer matter.

Does everyone who names the name of Christ agree up to this point? The principles are rather clear and universal. We begin to run into problems when we attempt to go past the principles. May I give a few examples? I know this is sort of dangerous because we all tend to “go off on tangents.” I only want to use these as examples of ignoring the facts. Notre Dame, Brigham Young and Bob Jones University all have similar student honor codes. This story could have happened at any of these schools. The following quote is from the blog “BradentonPatch,” though there are hundreds of other blogs with the same basic information. “Chis Peterman, a senior at Bob Jones University, racked up demerits after he created an activist group on campus, [attacking the High School principal] and ultimately was kicked out when his last demerits were issued for watching the television show “Glee” off campus. This is the same demerit system used at all of the US military academies, such as West Point, Annapolis and the Air Force academy in Colorado. Many times and in many schools violations of an agreed-upon code of conduct enforced by this demerit system have resulted in student expulsions. Probably the most famous expulsion was West Point, in the case of the rowdy undergrad George Armstrong Custer (George was later reinstated and his record purged, so this does not show up in every history of West Point). The point is, for better or worse, the demerit system has been around awhile.

The Huffington Post posts the following: “So the problem with going to college at a baptist [sic, Baptist should be capitalized and Bob Jones is non-denominational] school like Bob Jones University that ‘s actively working toward returning America to the 1740s is that there are some super ridiculous rules. For example, you can only watch certain TV shows off-campus like Girls and Breaking Bad and reruns of Real Sex. Just kidding. Those shows are most definitely on the banned list.

“Chris Peterman, a student at BJU (insert middle school sense of humor here), claims watching Glee on his computer at an off-campus Starbucks got him in big trouble with the school. So much trouble in fact, that they banned him from graduation by suspending him.

“While I think we can all agree that the plot doesn’t always makes [sic] sense on the show, I doubt that’s why it’s on their unapproved list. I’m going to take a wild guess here and assume it has something to do with their positive portrayal of LGBT students as well as their openess [sic] when it comes to discussing teen sexuality.”

I quoted the article in its entirety. It has no explanation for omitting important facts which turn the entire article into a lie. This is the modern “style.” The Huffington Post probably does not even think of this as a lie because everything in the article is factual (sort of). Simply omitting important information is “not important,” as long as it supports their religious beliefs. And apparently spelling words correctly isn’t important, either.

Is that example unclear? Please let me try again. JFK died 49 years ago, so the basic information about his administration is an established fact. Right? I was so wrong. In a facebook post a few weeks ago, I used JFK as an illustration. JFK was assassinated when I was in the 2nd grade in 1963. I pointed out that his administration was known for immorality. When he died, our teacher talked to us about his death, the school principle talked to us, another person came to school to talk to us, family members talked to me, our pastor talked to us, and so did others. I was only in second grade, so it is all kind of muddled, but the one thing I remember clearly is most, if not everyone, started off with something like, “JFK was an immoral man, but…” At that time, I knew nothing about the policies, religion, political party or history of JFK. All I remember were the eyelevel tabloids.

Was I right to post this as an illustration of something else entirely? Here are some of the comments: 1)”Is it your business to know the details of the confessional?” 2)”As a second grader, I seriously doubt you even know what the word hypocrite meant back then, and suspect the only ones painting the Roman Catholic church as anything were anti-Catholic bigots who have taught you very well to follow in their footsteps.” 3)”You say that public sins should be dealt with publicly, but how many people during JFK’s day knew of his shenanigans? Pretty much nobody, at least not the public.”

To this last comment I wrote, “JFK was a well known serial fornicator.” The same writer replied, “JFK’s pecadillo’s (sic) were not known by the public during his life.”

Why should I include these quotes in this blog? This is a blog about how to treat facts. First, I was alive and remember the tabloids and what people told me. But even if people do not believe me, the following is easily found after searching only a few minutes. The January 2, 1962 issue of Look magazine published a special on the Kennedys. It was quite favorable, but it included a small article on two secretaries who were nicknamed Fiddle and Faddle. National Enquirer (some question as to which tabloid was first) began publishing articles about JFK’s mistresses. In 1962 there were no large-audience-syndicated radio announcers like Howard Stern or Rush Limbaugh. Every little station throughout the country had its own stable of announcers. Some picked up on this story. The real news came with the death of Marilyn Monroe, August 5, 1962. When the report said that last person she called was JFK (true or not), that statement unleashed a worldwide media frenzy. In 1963, DNC Chairman John M. Bailey circulated a private memo wondering if JFKs immorality would become such a campaign issue that it would bring down the Democratic Party in the 1964 elections. He mused that maybe JFK should not run again.

This information is easy to find. Once again, this is not about JFK. It is completely about being truthful in handling facts. Yes, there are issues with facts on both sides and like a good juror, we must examine the facts carefully and come to the correct conclusion.

2 Replies to “Truth Stumbles in the Streets”