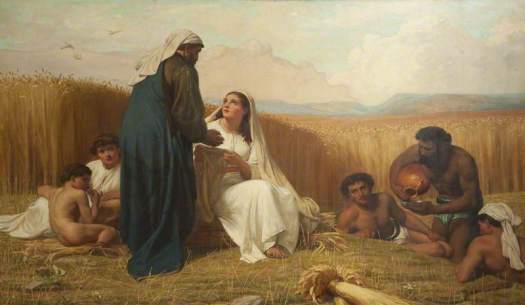 He wrote a commentary on Numbers 31:16-18 “Behold, these caused the sons of Israel, through the counsel of Balaam, to trespass against the Lord in the matter of Peor, so the plague was among the congregation of the Lord. Now therefore, kill every male among the little ones, and kill every woman who has known man intimately. But all the girls who have not known man intimately, spare for yourselves.”

And Deuteronomy 21:10-13: “When you go out to battle against your enemies, and the Lord your God delivers them into your hands and you take them away captive, and see among the captives a beautiful woman, and have a desire for her and would take her as a wife for yourself, then you shall bring her home to your house, and she shall shave her head and trim her nails. She shall also remove the clothes of her captivity and shall remain in your house, and mourn her father and mother a full month; and after that you may go in to her and be her husband and she shall be your wife.”

These are his words: “how to prepare a newly captured slave girl (after murdering her whole family) before RAPING her, and that you can just let her go if she doesn’t please you (clearly not a wife, with that condition, right?).”

To keep you from being confused, God gave us two entire books of the Bible on this issue from the woman’s point of view. Before considering the books of Ruth and Esther, we must understand two very important points. Killing people in war is not murder. That point is a lie. No sugar coating is possible. Second, liberal immorality has its own standards. Though liberals reject the authority of the Word of God and the sins condemned in the word of God, they elevate other behaviors to the status of sin which are either not called sins in the Word of God or are not severely condemned in the Word of God. Blasphemy, fornication, lying, stealing and neglecting your parents are all perfectly acceptable behavior (when no one gets hurt). Smoking and obesity are elevated to major sins, along with neglecting the homeless and probably the worst sin of all, exposing their hypocrisy.

In the Bible, corporal punishment is commanded. Prisons are condemned. Of course the sanctimonious hypocrisy of unbelievers arrogantly condemns any form of corporal punishment. They viciously condemn anyone who dares to disagree with their inflated sense of self-righteousness.

Which leads to their idea of the greatest sin, slavery. Probably slavery is such a great sin in the mind of liberals because we no longer have slavery in this country and also because specific conditions of slavery are spelled out in the Mosaic Law. Their condemnation of slavery is quite an ego boost. Slaves, according to the Word of God, were property. While we cannot support the caricature of slavery portrayed in Uncle Tom’s Cabin, responsible owners usually treat property very well.

The following linked article actually has some good points about the differences between worldly standards and understanding of slavery and how it is actually handled in the Bible http://kgov.com/what-does-the-bible-say-about-slavery

Slavery in Bible had two important features which differ from the slavery we are familiar with. Slavery for a Hebrew male was intended to be temporary. According to the Law, every Hebrew slave was to be released after seven years Exodus 21:2) and upon the year of Jubilee, every fiftieth year.

What seems bizarre to a liberal unbeliever is the provision for a bondslave. When the year of Jubilee came, a slave might choose, of his own free will, to remain a slave. Once the slave made that choice, he would remain a slave to the same master forever. Under the Law, a bondslave was not to be sold. Also, being a Jew was religious as well as national origin. Jewish convert slaves were to be release on the year of Jubilee as well. The failure of property owners to free their slaves was major issues under the ministries of Jeremiah and Nehemiah. This was one of the major sins which lead to the Babylonian captivity. They refused to free their slaves, so they became slaves.

Slavery for women was intended to be marriage. This is why unbelievers rant that this is rape. Since secularist thinking so dominates our culture, we will examine how two women, Ruth and Esther handled this Law. First, Jesus condemned the practice of more than one wife with these words “from the beginning of creation, God made them male and female. For this reason a man shall leave his father and mother, and the two shall become one flesh; so they are no longer two, but one flesh. What therefore God has joined together, let no man separate.” Mark 10:6-9.So according to the Law of Moses and the divine commentary by Jesus, to purchase a female slave meant the same as to acquire a wife.

A Hebrew man with a Hebrew wife and two Hebrew sons from the tribe of Judah and the city of Bethlehem traveled around the Dead Sea to the country of Moab. His two sons married Moabite women. The man and his two sons died. His widow, Naomi, and the two daughters in law started back to Bethlehem, but one woman returned to Moab. Ruth rejected the gods of Moab and accepted the God of Israel. Back in Judah, Ruth gleaned in fields as a slave girl, or a homeless woman even below the status of a slave. She requested and received redemption from a wealthy landowner named Boaz. This redemption made Ruth, a foreigner and either a slave or below a slave, his wife. She likely had to undergo the purification rites described in Deuteronomy 21. David was the great-grandson of Ruth and Boaz.

The traditional view of Esther is that she was in the line of Saul, with the social status of a noblewoman. The Babylonians dragged her family into slavery, along with all the Jews. When the Persian King, either Xerxes according to Jewish tradition, or Artaxerxes his son according to the LXX, wanted a new Queen, he forcibly put Esther into the harem. Most of the women put into the harem would have sex one time with the king and be isolated from all men for the rest of their lives. One, and only one woman, whom the king would choose would be Queen. But the woman chosen to be Queen could be killed or exiled at any time, based on the whim of the king. What rational woman would want this? Unlike the Jewish purification rites of thirty days, as recorded in Deuteronomy 21, Esther had to undergo twelve months of purification rites. Also under the Mosaic Law, if a slave woman was taken to be a wife, the man was responsible to provide for her the rest of her life, even if he took another woman as a wife. The Persian concubines who the king rejected had food and clothing but lived in isolation. Under Mosaic Law, a rejected woman could be freed, a freedom the rejected women of the Persian harem would love to have had.

So while secular humanist sneers, “clearly not a wife,” the truth is, not only was she a wife, but she was better off than the concubines in the harem of the Persian Court.

One Reply to “Marriage Is Not Rape — Post by Michael J. Findley”