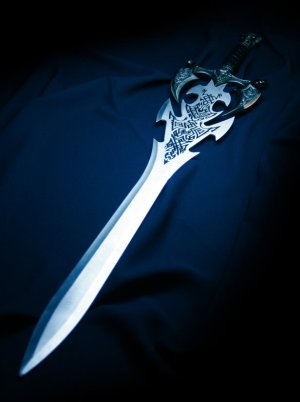 On all the barren heights in the desert destroyers will come. Indeed, a sword of the LORD will devour from one end of the land to the other. There will be no peace for any person (Jeremiah 12:12, ISV).

Whenever the sword of Lord is mentioned in the Old Testament, it is a literal sword. Even when the use might be metaphorical, the sword means death and destruction. The method might be a plague or some other form of death. The people of Israel understood that the sword of the LORD was an instrument of death.

The Apostle Paul dramatically changed that imagery for New Testament believers. And take the helmet of salvation, and the sword of the Spirit, which is the word of God: (Ephesians 6:17).

The book of Hebrews uses the same imagery. For the word of God is living and active, sharper than any double-edged sword, piercing until it divides soul and spirit, joints and marrow, as it judges the thoughts and purposes of the heart (Hebrews 4:12, ISV).

This imagery is continued by John in the last book of the New Testament, the Revelation, written about 95 AD. In his right hand he held seven stars, and out of his mouth came a sharp, two-edged sword. His face was like the sun when it shines with full force (Revelation 1:16).

The power of the tongue was not a new concept, but it is somewhat difficult for us to understand. Solomon said, “The positive words that a man speaks fill his stomach; he will be satisfied with what his lips produce.” (Proverbs 18:20, ISV). In our culture, which emphasizes the positive, this is not too unusual.

But the very next verse says, “Death and life are in the power of the tongue; and whoever loves it shall eat its fruit.” (Keil and Delitzsch commentary translation) Even metaphorically, we do not think of a tongue as an instrument of death.

Jesus said, “Again, you have heard that it was told those who lived long ago, ‘You must not swear an oath falsely,’ but ‘You must fulfill your oaths to the Lord.’ But I tell you not to swear at all, neither by heaven, because it is God’s throne, nor by the earth, because it is his footstool, nor by Jerusalem, because it is the city of the Great King. Nor should you swear by your head, because you cannot make one hair white or black. Instead, let your message be ‘Yes’ for ‘Yes’ and ‘No’ for ‘No.’ Anything more than that comes from the evil one.” (Matthew 5:33-37).

We understand that we are to be truthful, kind, and honest with our words; words that we write as well as speak. But we have difficulty equating the Sword of the Lord with life and death. David understood this very clearly. David asked the young man who related the story, “How do you know that Saul and his son Jonathan are dead?” The young man who had been relating the story answered, “I happened to be on Mount Gilboa and there was Saul, leaning on his spear! Meanwhile, the chariots and horsemen were rapidly drawing near. Saul glanced behind him, saw me, and called out to me, so I replied, ‘Here I am!’ He asked me, ‘Who are you?’ So I answered him, ‘I’m an Amalekite!’ He begged me, ‘Please—come stand here next to me and kill me, because I’m still alive.’ So I stood next to him and killed him, because I knew that he wouldn’t live after he had fallen. I took the crown that had been on his head, along with the bracelet that had been on his arm, and I have brought them to your majesty.” On hearing this, David grabbed his clothes and tore them, as did all the men who were attending to him. They mourned and wept, and then decided to fast until dusk for Saul, for his son Jonathan, for the army of the LORD, and for the house of Israel, because they had fallen in battle. Meanwhile, David asked the young man who had told him the story, “Where are you from?” He answered, “I’m an Amalekite, the son of a foreign man.” At this David asked him, “How is it that you weren’t afraid to raise your hand to strike the LORD’s anointed?” Then David called out to one of his young men and ordered him, “Go up to him and cut him down!” So he attacked him and killed him. David told him, “Your blood is on your own head, because your own words testified against you! After all, you said, ‘I myself have killed the LORD’s anointed!'” (2 Samuel 1:5-16).

Each of us has the same responsibility. I saw the dead, both unimportant and important, standing in front of the throne, and books were open. Another book was opened—the Book of Life. The dead were judged according to their actions, as recorded in the books (Revelation 20:12). One of our actions (works, KJV) are the words we speak. Just like the internet, our words are never deleted. And they will be presented in judgment if they are not covered by the blood of the Lord Jesus Christ.

3 Replies to “The Sword of the Lord”