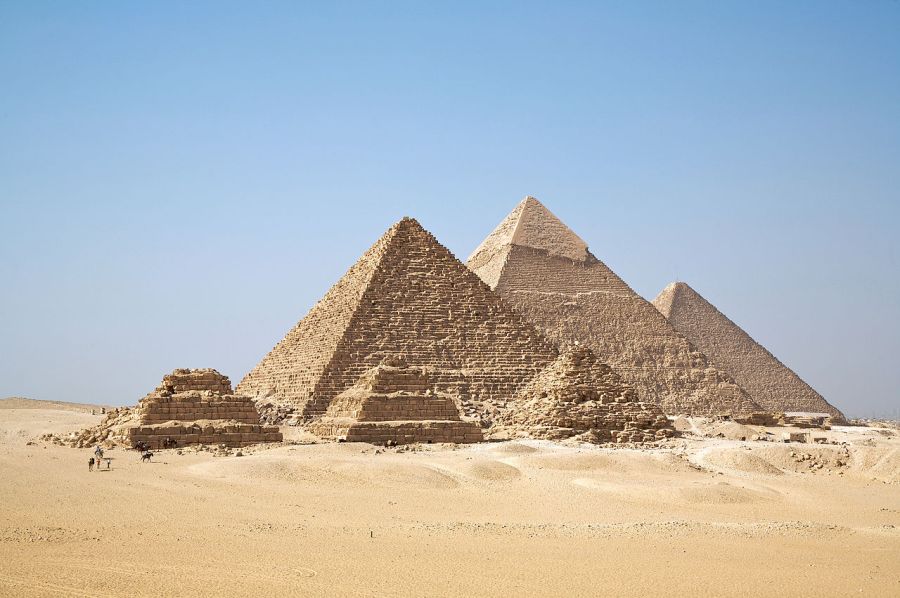 The Greek Herodotus wrote a book in the 5th century BC he called Inquiries or To Know By Searching Out. We transliterate the letters Histories. Though written more than 1,600 years after the pyramids of Giza were built, the diligent inquiries of Herodotus are the most reliable records we have for the construction of the Egyptian pyramids. Herodotus inquired of the Egyptians alive in his day, who related this record to him. It is neither a primary nor a secondary source, yet it is the most accurate information available to us. Herodotus himself begins the section on Egypt with this disclaimer: “These Egyptian stories are for the benefit of whoever believes such tales: my rule in this history is that I record what is said by all as I have heard it.”

Those who, like myself, would like to know why the pyramids were built will find this disappointing. It only gives one version of one possible way the pyramids might have been constructed. Here is link to the complete work, The History of Herodotus parallel English/Greek English translation: G. C. Macaulay, (pub. Macmillan, London and NY) [1890] http://www.sacred-texts.com/cla/hh/ And here is a link to the section on the building of the pyramids. http://www.cheops-pyramide.ch/khufu-pyramid/herodotus.html

“Down to the time when Rhampsinitos was king, they told me there was in Egypt nothing but orderly rule, and Egypt prospered greatly; but after him Cheops became king over them and brought them to every kind of evil.” Cheops is his Greek name. He had several Egyptian names, but the most well know is Khufu. He enslaved the entire country and made “all the Egyptians work for him.” The description made by Herodotus makes Khufu seem like a crazed, power-mad maniac.
The individual stones were cut upstream and loaded onto a ship called a “baris.” Once the stone was unloaded, the barge was dragged upstream from the shore back to the place of stone cutting. The construction of the barges are described in detail.

The Egyptians “worked by a hundred thousand men at a time, for each three months continually. Of this oppression there passed ten years while the causeway was made by which they drew the stones, which causeway they built, and it is a work not much less, as it appears to me, than the pyramid; for the length of it is five furlongs and the breadth ten fathoms and the height, where it is highest, eight fathoms, and it is made of stone smoothed and with figures carved upon it. For this, they said, the ten years were spent, and for the underground chambers on the hill upon which the pyramids stand, which he caused to be made as sepulchral chambers for himself in an island, having conducted thither a channel from the Nile. For the making of the pyramid itself there passed a period of twenty years; and the pyramid is square, each side measuring eight hundred feet, and the height of it is the same. It is built of stone smoothed and fitted together in the most perfect manner, not one of the stones being less than thirty feet in length.”

From this description, most historians have dismissed this entire account because pulling these stones up any kind of causeway is impossible, as many have demonstrated. However, nothing in this says that the causeway was uphill. If the stones were pulled downhill, even on a slight grade, and they had some type of lubricant, the stones could be moved. The great pyramid has an estimated 2.3 million stones.

The three pyramids were built in a total of 106 years. “This Cheops, the Egyptians said, reigned fifty years; and after he was dead his brother Chephren succeeded to the kingdom. This king followed the same manner as the other, both in all the rest and also in that he made a pyramid, not indeed attaining to the measurements of that which was built by the former (this I know, having myself also measured it), and moreover there are no underground chambers beneath nor does a channel come from the Nile flowing to this one as to the other, in which the water coming through a conduit built for it flows round an island within, where they say that Cheops himself is laid: but for a basement he built the first course of Ethiopian stone of divers colours; and this pyramid he made forty feet lower than the other as regards size, building it close to the great pyramid. These stand both upon the same hill, which is about a hundred feet high. And Chephren they said reigned fifty and six years. Here then they reckon one hundred and six years, during which they say that there was nothing but evil for the Egyptians…”

The Egyptians who labored on the pyramids where fed, housed, clothed, and given medical attention. But they were not paid. Even so, the cost bankrupted the country. “On the pyramid it is declared in Egyptian writing how much was spent on radishes and onions and leeks for the workmen, and if I rightly remember that which the interpreter said in reading to me this inscription, a sum of one thousand six hundred talents of silver was spent; and if this is so, how much besides is likely to have been expended upon the iron with which they worked, and upon bread and clothing for the workmen, seeing that they were building the works for the time which has been mentioned and were occupied for no small time besides, as I suppose, in the cutting and bringing of the stones and in working at the excavation under the ground?”

“Cheops moreover came, they said, to such a pitch of wickedness, that being in want of money he caused his own daughter to sit in the stews, [the wages of prostitution] and ordered her to obtain from those who came a certain amount of money (how much it was they did not tell me); but she not only obtained the sum appointed by her father, but also she formed a design for herself privately to leave behind her a memorial, and she requested each man who came in to her to give her one stone upon her building: and of these stones, they told me, the pyramid was built which stands in front of the great pyramid in the middle of the three, each side being one hundred and fifty feet in length.” The third pyramid was built by Mykerinos, son of Cheops. “This king also left behind him a pyramid, much smaller than that of his father, of a square shape and measuring on each side three hundred feet lacking twenty, built moreover of Ethiopian stone up to half the height.”

The important point which has puzzled many is the actual assembly of the stones once they were on site. The description of Herodotus leaves much to the imagination. “This pyramid was made after the manner of steps, which some call “rows” and others “bases”: and when they had first made it thus, they raised the remaining stones with machines made of short pieces of timber, raising them first from the ground to the first stage of the steps, and when the stone got up to this it was placed upon another machine standing on the first stage, and so from this it was drawn to the second upon another machine; for as many as were the courses of the steps, so many machines there were also, or perhaps they transferred one and the same machine, made so as easily to be carried, to each stage successively, in order that they might take up the stones; for let it be told in both ways, according as it is reported. However that may be, the highest parts of it were finished first, and afterwards they proceeded to finish that which came next to them, and lastly they finished the parts of it near the ground and the lowest ranges.”

While the traditional view is that the stones could not be put in place this way, there are several possibilities. First, there was water surrounding the pyramid. The lower stones are much larger and a dike could have been constructed to make a moat or pond and float the larger stones into place. When they were too high to add more water, the “machines” took over. Levers can raise stones inches at a time. Since Herodotus uses the word machine, there were likely a series of levers. But it would be difficult to move the stone laterally, that is sideways. So the stone would require precise placement before the machine began lifting it.

The details Herodotus leaves with us certainly make the building of the pyramids by this method seem unlikely, though possible. As I began this piece, we still do not know why they were built.

9 thoughts on “Building the Pyramids of Egypt According to Herodotus — post by Michael J. Findley”