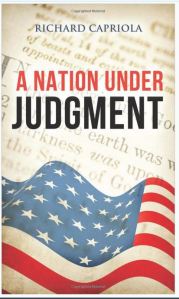 How do you define wisdom? For some it’s measured by a person’s level of knowledge and learning or by one’s level of education. Dictionaries define wisdom as philosophic and scientific learning. Other definitions of wisdom include sound judgment, good insight, or common sense. Native Americans believe wisdom is earned only after living a long life that brings learning and experience.

These definitions have merit, but they fall short of a biblical definition of wisdom. Biblical wisdom can be defined as the ability to see things from God’s point of view. As Christians, our wisdom grows when we understand and accept God’s point of view. The same is true of nations; they show wisdom when they align their policies with God’s view.

Without wisdom people can find themselves in trouble and countries risk disaster. The further a nation strays from God’s point of view, the closer it comes to being a nation under judgment.

We live in a nation that prides itself on being “one nation under God.” We ask for God’s blessing in songs like “God Bless America” by Irving Berlin. Our Supreme Court opens every session with “God save the United States and this Honorable Court.” The president and other politicians pandering for our votes give speeches that end with “God bless America.”

But what does it mean to be “one nation under God?” Have the words become merely a patriotic slogan? Do they have value only in times of national crises, when we feel threatened? Are we a nation asking for God’s protection and blessings while turning away from His point of view?

As a nation “under God” do we see things from God’s point of view when shaping national policies? Or have we lost our wisdom as a nation? When we create polices on hunger, homelessness, poverty, protecting the environment and marriage, are we following God’s point of view – or a political agenda? What does it say about our values when one of every fifty children lacks sufficient food, in a nation that wastes 40 percent of its food? These are important questions that must be asked if we value being a nation “under God” because the answers may point to a nation moving away from God’s point of view and losing its wisdom.

Our Founding Fathers knew that we could not indefinitely exist apart from God’s point of view. George Mason warned that providence would punish national sins with national calamities. Thomas Jefferson said “I tremble for my country when I reflect that God is just and that his justice cannot sleep forever.” These great men understood that our nation’s future rests on its commitment to live by the words “one nation under God” and that we must create national polices that reflect His point of view rather than policies that conform to a political agenda.

Have we lost our wisdom as a nation – our ability to see things from God’s point of view? Ultimately the answer to that question will determine if we are headed toward being a nation under judgment.
————————————————-
Richard Capriola is the author of A Nation Under Judgment. His book defines wisdom as the ability to see things from God’s point of view. It addresses many of our nation’s social issues such as hunger, homelessness, marriage, the environment and abortion and empowers readers to consider if we are moving away from being One Nation Under God and moving toward God’s judgment. He completed four years of Clinical Pastoral education and has served as a hospital chaplain and mental health counselor. His book is available on Amazon and readers can view a book trailer at www.anationunderjudgment.com He resides in Katy Texas.