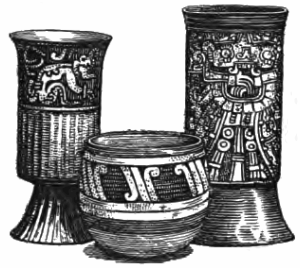 If Keith had to assign a Bradley Central report on this trip, he had an idea what the favorite part of this day would be. The museum had just added on a welcome center outside the gift shop where they could try small samples of cocoa as the original Olmecs might have drunk it. The kids loved the tiny versions of tecomates, the round, decorated pottery jars for drinking it.

They counterfeited cocoa beans?” Tom exclaimed, reading the various posters about the history of cocoa.

“Yeah, because they used them for money,” Rikki replied. “That is unreal. They hollowed out those little beans and filled them with sand.”

“They made their cocoa foamy!” someone else said. “How’d they do that without an espresso machine?”

The display included Inca and Aztec uses of cacao beans, since so little was known about how the Olmec did it. At first they made faces at some of the varieties, especially the unflavored brew, but most of them still tried the different dried flower essences, vanilla, honey, maize, and lime.

Keith saw Talia sneak out of her aunt and uncle’s lecture and tour three times to get more of the chili-flavored kind. He refused to even taste it, but it was fun to feel the baby dance extra fast after those multiple chocolate doses had hit Talia’s system.

“Maybe I should stop,” Talia lamented.

“Maybe you should.” Keith laughed.

“But they’re such little cups. And it’s so good!”