(This is an excerpt from Disestablish, a 50-page summary of the Antidisestablishmentarianism and Conflict of the ages series to date.) 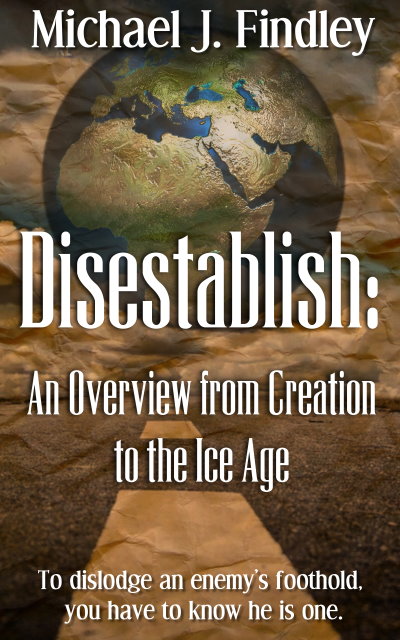 The concept of an establishment of religion began very soon after the flood with Nimrod in Babel. Plato detailed what he thought to be the ideal establishment of religion in his work, Republic. Aristotle, China, Egypt, and every other ancient culture has writings detailing how their establishment of religion should work. Many others governments and cultures have nearly identical standards for a state or established religion. Though many kingdoms rose and fell, the practice of a state religion enforced on different populaces used paganism for more than 2,000 years. The spread of Christianity throughout the Roman Empire witnessed the disintegration of paganism and the old established religions, such as Rome where Caesar was both head of state and high priest (Pontifex Maximus).

During the Dark Ages, not only paganism, but all forms of government collapsed. During this time, established religions were separated from the head of state. In England, the Magna Carta opened with the words that “the English Church is to be free and to have all its rights fully and its liberties entirely.” In spite of these words, the monarch was still the head of Church, appointing the Archbishop Canterbury. On the European continent, the peace treaties of Augsburg and Westphalia allowed princes to worship in their own way and establish the religion of their choice in their territories, separate from the emperor. These treaties also permitted the worship of God in other ways besides the established religion. For one of the few times in history, people could worship God apart from the established religion.

As part of the ratification process of the first amendment of the US Constitution, all thirteen colonies put in writing their understanding of an establishment of religion. Without exception, an establishment of religion means government control, taxation and legislation of public worship, thoughts, ideas, education, welfare, and provisions for poor people. State establishments of religion were permitted under the newly-passed First Amendment to the US Constitution, though there was considerable disagreement as to this being a good idea. At the time of the ratification of the US Constitution, every one of the original thirteen colonies had some degree of an establishment of religion. In some colonies, such as Rhode Island, it provided little more than to make government buildings available for education. In other colonies, such as Virginia, clergy were paid through taxation. All of the original documents are available through http://www.archives.gov/historical-docs/.

Several important men opposing any established religion of any kind were Roger Williams, William Penn, John Bunyan, George Whitefield, John and Charles Wesley, James Madison, and George Washington. Because these men were opposed to government control of welfare and education does not mean that they were opposed to education or helping people in need. In fact these men were the colonial leaders in raising funds to support charitable institutions and schools. George Whitefield founded an orphanage and spent the rest of his life raising funds for it.

There is no law, or even policy, for the separation of church and state in the United States. Separation of church and state is certainly not found in the Constitution. The very attempt makes a secular state into an establishment of religion. It was never the intention of the men who wrote these documents to have the state persecute the church; any church. It was the intent that no one church, or non-church, would be favored over others.

It is important to understand that during this time of defining an establishment of religion, Thomas Paine rejected not only Christianity, but all religion except humanism. By doing this, Thomas Paine brought the secular humanism of Plato’s Republic to America and desired to make a secular government our establishment of religion. But it would take over one hundred fifty years to turn those desires into the official policies of the United States government.

This book is free at all online ebook retailers