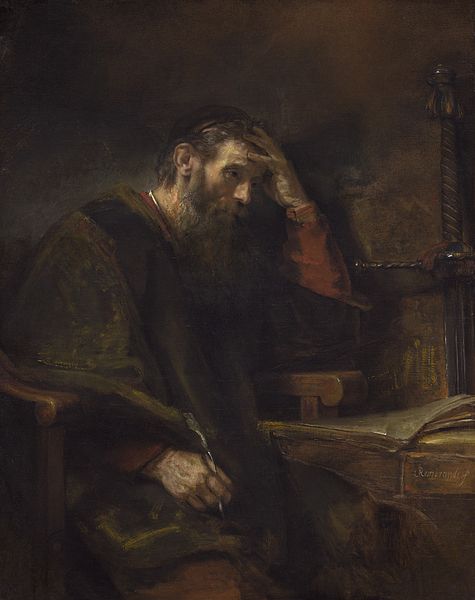 Remember Jesus Christ, risen from the dead, the offspring of David, as preached in my gospel (Timothy 2:8 ESV)

… on that day when God, through Jesus the Messiah, will judge people’s secrets according to my gospel. (Romans 2:16 ISV)

Now to the one who is able to strengthen you with my gospel and the message that I preach about Jesus, the Messiah, by revealing the secret that was kept hidden from long ago but now has been made known through the prophets to all the gentiles, in keeping with the decree of the eternal God to bring them to the obedience that springs from faith – to the only wise God, through Jesus the Messiah, be glory forever! Amen. (Romans 16:25-27)

Paul is the only New Testament author to use the phrase “my gospel.” His good news, gospel, differed from the gospel of Jesus in two important ways. Paul, with the gift of the Holy Spirit, had information given to him which Jesus had not revealed before ascending into heaven.

But the Helper, the Holy Spirit, whom the Father will send in my name, will teach you all things and remind you of everything that I have told you. (John 14:26)

For I want you to know, brothers, that the gospel that was proclaimed by me is not of human origin. For I did not receive it from a man, nor was I taught it, but it was revealed to me by Jesus the Messiah. (Galatians 1:11,12 ISV)

But when God, who set me apart before I was born and who called me by his grace, was pleased to reveal his Son to me so that I might proclaim him among the gentiles, I did not confer with another human being at any time, nor did I go up to Jerusalem to see those who were apostles before me. Instead, I went away to Arabia and then came back to Damascus. Then three years later I went up to Jerusalem to become acquainted with Cephas, and I stayed with him for fifteen days. (Galatians 1:15-18 ISV)

Paul knew mysteries revealed to him Jesus and the Holy Spirit that no one else knew, including the other disciples.

Paul was also set apart from all the other apostles with a special gift from God. Paul was the apostle to the Gentiles.

This means that Paul had to do a great deal of background teaching. Many of his audience knew little or nothing of the Word of God. And sometimes Paul was driven away soon after arriving at a city. Paul had to simplify his message to what he considered to be the most basic points. Except for Romans and the two Corinthians, Paul’s letters are very short; six brief chapters, usually less. Paul’s gospel was the combination of new revelation and brevity. This combination became the foundation for Gentile churches.

The basic argument against “Paul’s gospel” was made by Jews who insisted that Gentiles become Jews in order to be saved. These men followed Paul and caused problems throughout the gentile churches. Paul wrote the book of Galatians to correct these problems. When Paul came to Jerusalem, a council to met to determine and make a rule on “Paul’s gospel.”

The Jerusalem Council was not ruling on everything the gospel included. But it did rule on what was the absolute minimum requirement for Gentile believers.

Greetings. We have heard that some men, coming from us without instructions from us, have said things to trouble you and have unsettled you. So we have unanimously decided to choose men and send them to you with our dear Barnabas and Paul, who have risked their lives for the sake of our Lord Jesus, the Messiah.

We have therefore sent Judas and Silas to tell you the same things by word of mouth For it seemed good to the Holy Spirit and to us not to place on you any burden but these essential requirements: to keep away from food sacrificed to idols, from blood, and anything strangled, and from sexual immorality. If you avoid these things, you will do well. Goodbye. (Acts 15:24-29 ISV)

Later, Paul had the opportunity to put this into practice in Athens. When brought before the Athenians at the Areopagus, Paul had very little time. He had to get their attention and present as much of the gospel as they would accept before they force him to leave.

So Paul stood up in front of the Areopagus and said, “Men of Athen, I see that you are very religious in every way. For as I was walking around and looking closely at the objects you worship, I even found an altar with this written on it: ‘To an unknown god.’ So I am telling you about the unknown object you worship.

The God who made the world and everything in it is the Lord of heaven and earth. He doesn’t live in the shrines made by human hands, and he isn’t served by people as if he needed anything. He himself gives everyone life, breath, and everything else. From one man he made every nation of humanity to live all over the earth, fixing the seasons of the year and the national boundaries within which they live, so that they might look for God, somehow reach for him, and find him. Of course, he is never far from any one of us.

For we live, move, and exist because of him, as some of your own poets have said: ‘… Since we are his children, too.’ So if we are God’s children we shouldn’t think that the divine being is like gold, silver, or stone, or is an image carved by humans using their own imagination and skill. Though God has overlooked those times of ignorance, he now commands everyone everywhere to repent, because he has set a day when he is going to judge the world with justice through a man whom he has appointed.

He has given proof of this to everyone by raising him from the dead. When they heard about a resurrection of the dead, some began joking about it, while others said, “We will hear you again about this.” And so Paul left the meeting. Some men joined him and became believers. With them were Dionysius, who was a member of the Areopagus, a woman named Damarius, and some others along with them. (Acts 17:22-33 ISV)