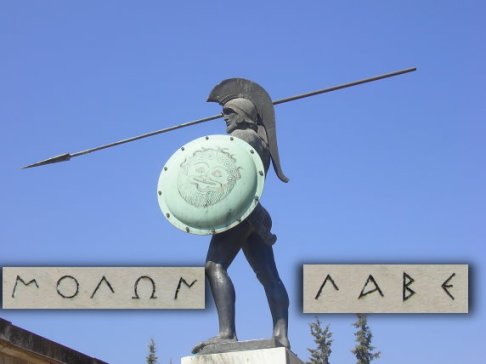 These are the words of the Spartan King Leonidas to the Persian King Xerxes at the battle of Thermopylae. The Spartans were asked to surrender their weapons. “Come and Take It,” the slogan of the Texas revolt, was based on this challenge.

When we use these phrases, we must remember that both the attackers, Xerxes and Santa Ana, both came and took them, killing all who uttered these words at Thermopylae and the Alamo. Since words mean things, we must be careful what we say. Are we prepared to give up our lives to preserve liberty and freedom for our wives and our children?

Does this sound extreme? It is July 2012. America has lost the Presidency. Though anything can happen, there is better than a 99% chance that our next President will either be a re-elected Barack Obama or Mitt Romney. From these two really awful choices, Christians have the responsibility to vote for the man who will provide the greatest possible freedom to preach and teach the Word of God. Barack Obama has attacked Christianity as much as he can. But the need to be re-elected has moderated these attacks. I would not be surprised to see anyone opposing him in his 2nd term thrown into prison. Mitt Romney governed MA as a liberal. Mitt Romney will also be restrained by the need to run for re-election.

Solid believers need to vote for Mitt Romney because he offers a chance of providing slightly more freedom. We also need to support him because if we get a better candidate in the future to run in the general election, we will need the votes of liberal Republicans at that time. If we fail to support the party nominee now, why should they support the party nominee then?

The immediate goal of those who wish to invest time and money into providing for liberty and freedom for our wives and children are the senate races. 33 of the 100 seats are being contested this year. Nine of those seats have the current senator retiring. Five have Republicans running for re-election. People who normally vote as a liberal hold all of the remaining 19 seats. While the work is enormous, so are the possibilities for great victory. Whoever is the president ratifies treaties and confirms judges, and not just on the Supreme Court. Wikipedia has a complete list of every election in each state with each candidate.

Once again, if you are going to invest any time or money in any election, invest it in the best possible senate candidate, even if neither senator from your state is running for re-election.

I am constantly asked, “Why do we have such horrible presidential candidates?” The short answer is that liberals have captured the election process. Though there are many facets to this problem, two simple solutions would cure the vast majority of our election ills.

First, we are drowning in voter fraud. While voter fraud happens everywhere, it is by far worse in large cities; Miami, Chicago and LA cannot even consider an honest candidate. My solution to voter fraud is a Constitutional amendment to pay a $10,000 bounty per vote to anyone who proves voter fraud and has the vote removed. Congress will have the authority to raise the bounty, but it will never go below $10,000. This money will be collected as a fine against the state allowing the illegal voting. Congress can define an “honest mistake” exception from the fine. The market will take care of the most outlandish abuses.

Second, the primary process is skewed towards the most liberal candidate from each of the major parties. Simply pass a federal law requiring all presidential primary elections to be held within a single six-week timeframe. Any delegates or candidates elected outside of this timeframe would not be able to vote at the party convention. While congress normally should not interfere directly in party machinery, neither party abided by their own rules for the 2012 primary elections.

Yes, there are more problems, but these begin to fix the most serious problems.

One thought on “Molon Laba “Come and Take Them.””