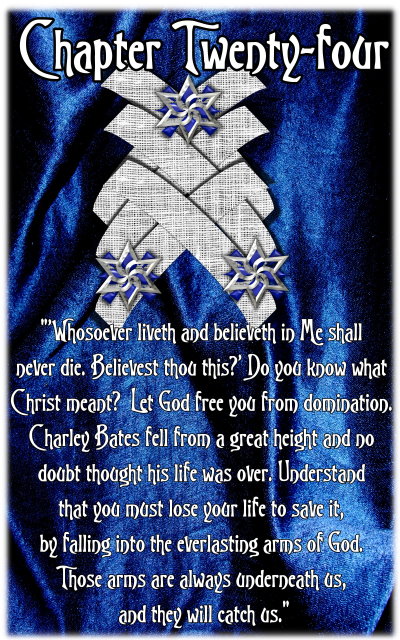 The walls were patterned like glittering silver and black marble, with slender pillars spaced along the sides. Niches held blue flames behind ornate silver gratings cast in the shape of openwork doves.

Black benches cushioned with blue velvet, very like church pews, were arranged facing a black velvet curtain fringed with silvery tassels. We took seats at the direction of the same two assistants who had accompanied Jessica Fagin to get the body. At least, to my eyes they appeared the same. Fagin appeared from behind the curtain a moment later and the men faded off to the sides.

“Welcome,” Fagin said. “This place is for you. Grieve, celebrate, pray, praise — The official time when others may come has been published widely in newspapers, by wireless, and by posted bills. After the time of the public visitation has expired my attendants and I will leave. We will set the doors to lock automatically and unlock from the inside only, so that you may remain protected here or leave at any time you wish. Stay through the night if you desire to keep vigil.

“You will not be disturbed or interrupted before dawn, as the locks will be timed to deny outside entry. In the morning, my attendants and I will return to lay your friend to rest.” Fagin herded her attendants toward the back of the room. Two hours had been advertised for the visitation this evening. The curtain at the front opened of its own accord and we saw the barrow carrier behind it, curtains drawn to the back, fully exposing the fragrant, wrapped body of Charley Bates resting on it.

To our surprise, people began to arrive. Charley Bates had evidently been a popular fellow in London, but the class of people who began to trickle in paid no compliment to his own character or the company he kept. We of the Legacy Company immediately went on guard as these filthy, shuffling, shifty-eyed mourners filed in and passed by Bates’ body before finding seats. We managed to spread ourselves out among them and kept a careful watch.

Madame Phoebe stepped to the lacquered black podium and began to sing as more people entered the auditorium. Her glorious voice poured out prayer and praise and we saw wonder, discomfort, all manner of emotions, flicker across the faces of the newer arrivals.

We of the company had to force ourselves to remember that we were in this place, after all, for more than just the solution to a mystery. it was not so difficult, however, hearing this angelic voice reminding us that God controlled what seemed like madness and mayhem to our weak human vision. To their credit, this rabble quieted their whispers and cackles and snorts upon entering. Reverend Ferrars pointedly greeted and shook the hand of every stranger in that strange assembly, producing much more discomfort. After a half-hour the stream of mourners seemed to stop.

“We welcome you all here,” Madame Phoebe said. “This is not a church, but we who believe in Christ have brought Him here in our hearts. Do not harden your own hearts, but let Him do a work here tonight.” She seated herself. Edward approached the podium and set his Bible upon it. When he adjusted his half-glasses into place and opened the Book before him, some even bowed their heads as he began to pray.

“Gracious Heavenly Father,” he said in a clear, carrying voice, “You brought Charley Bates to us, though he thought he came of his own will, to do his own will. Instead he found Christ. You have now brought these others, people who thought they came of their own will, for their own reasons. May we see these find Christ as well. You have not taken Charley from us, but merely brought him home to yourself. In Christ’s name we have come, and in His Name we say Amen.

“The book of Job always comes to mind when I think of funerals,” Edward said, looking up and beaming innocently around on that very mixed multitude. “Think of the horrible incidents where Satan attacked Job. Think of all that he lost and all that he suffered. But remember that God said to Satan, ‘Spare his life’.

“And God did protect Job’s life. Not that it mattered to Job about his physical life. His wife nagged him to ‘Curse God, and die’, but Job said, ‘Though He slay me, yet will I trust him’. We who take every precaution to protect, nourish, and cherish our physical bodies and lives cannot comprehend this. ‘Though this body be destroyed, yet in my flesh I will see God,’ Job assured us.

“In the New Testament, Christ says, ‘I am the resurrection and the life. He that believeth in me though he were dead, yet shall he live. And whosoever liveth and believeth in Me shall never die. Believest thou this?’ He said this on his way to the tomb of a dead man. Do you know what He meant?

“Stop thinking you must serve a wicked master because only he will feed you, shelter you, protect you. Let God free you from domination. Charley Bates fell into our company from a great height and no doubt thought his life was over. Understand that you must lose your life to save it, by falling into the everlasting arms of God. Those arms are always underneath us, and they will catch us.”

Edward looked around. I put my arm around Kera because she began to tremble beside me. Madame Phoebe laid a comforting hand on Oliver Twist as he began to weep, overcome by his memories, his pain, and perhaps truly at the thought of Charley Bates having been so briefly his brother in Christ.

One thought on “At Fagin’s Final Rest Mortuary”