Lot’s story begins before Genesis 19, when he separated from Abraham and chose his land near Sodom. But let’s not call him selfish, or wicked, or anything else bad, for that choice, because the Bible calls him righteous. (2 Peter 2:7) He invited in the angels God sent, tried to protect them, and to act on their warnings. How did that turn out?
Genesis 19:14 says, “Lot went out and spoke to his sons-in-law, who were to marry his daughters, and said, ‘Up, get out of this place, for the Lord will destroy the city.’ But he appeared to his sons-in-law to be jesting.” Some people have made sermons out of the number of people who could at least have been saved if Lot had used his influence rightly, based on the conversation Abraham had with the Lord about how many righteous people it would take to save Sodom. But as it turns out, Lot couldn’t even make his own wife and youngest daughters just believe and come along willingly to escape destruction. They all had to be dragged out by force, and his wife still didn’t make it. His daughters didn’t turn out so good, either. Through incest they started idolatrous races that hated and fought against God’s people, the Moabites and the Ammonites. Somewhere along the line Lot’s choices didn’t impress the people he had influence over enough to make their own right choices. 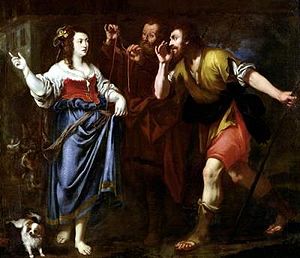 Lot and his and his family’s choices stand in contrast to someone who really had no choice. In Joshua 2, it doesn’t say that Rahab chose to invite in the spies and offer to help them. Let’s do call her a harlot, because the Bible calls her that. She ran a business, and the men came to that business, which may also have been an inn. An inn seemed like a safe place for spies to go, usually, but the city fathers found out they were there … and yet, they weren’t there when the soldiers came to arrest them. Rahab may not have known who or what they were until she got some sort of split-second warning and made a split-second decision.
The Bible doesn’t say much about Rahab’s other choices in life, but it does say she had much the same information as Lot on which to base the big choice we do know about. She’d been warned destruction was coming soon. She hadn’t really even been offered a way out, though. She got herself one by bargaining. The spies promised her conditional safety, and she got that promise extended to her whole family.
The Bible says Rahab asked for safety for “her father’s household” which could have been a lot of people, perhaps the same number that Lot had the chance to influence. The condition was, everybody had to stay inside that house. She didn’t even know how or when the city was going to be overthrown. Seems as if the spies didn’t know yet. But Rahab got everybody into her house, much like Noah got everybody into the ark, and had to keep them there.
The very fact that she got them inside means they didn’t think she was joking, like Lot’s sons-in-law did. Did she get them in the day the spies left? Don’t know. Maybe. But days went by before anything happened. Remember that the spies showed up in Chapter 2, and the walls didn’t fall until Chapter 6. The following conversation is not in the Bible, but maybe this is how things went in Rahab’s house during those days.
“Rahab, I forgot my — ”
“Doesn’t matter what you forgot! Stay in the house!”
“Those people are just walking around with that thing under the blue sheet and those trumpets again, Aunt Rahab. Nothing’s happening. Can’t I go outside and play?”
“No! Stay in the house.”
“It’s been a week, Rahab. Can’t we just — ?”
“No! Stay in the house!”
Did you catch the fact that Rahab’s house was built on the wall? Did you catch the fact that the walls of Jericho came a-tumblin’ down? Imagine all these people crouching in each others’ arms with trumpets and shouting and rumbing and crashing all around them.
“But the walls are falling down, Rahab, and your house is on the wall!”
“Doesn’t matter! Stay inside!”
The Bible says they were all saved. “However, Rahab the harlot and her father’s household and all she had, Joshua spared; and she has lived in the midst of Israel to this day, for she hid the messengers whom Joshua sent to spy out Jericho.” (Joshua 6:25) Papa, mama, brothers and sisters, maybe even aunts, uncles, cousins, nephews and nieces. Don’t know for sure but remember it says her father’s household. A whole lot more people were saved this time than made it out of Sodom.
And there’s an even better result of Rahab’s choice. She became the wife of an Israelite, someone from the tribe of Judah. And the tribe of Judah is the family from which Jesus Christ was born. Good choice, Rahab.

One thought on “The Righteous Soul and the Harlot’s Heart — post by by Mary C. Findley”